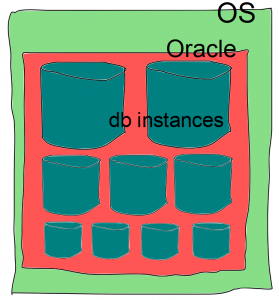 I read an article in Computer Sweden today where Kappahl couldn’t do virtualization of their Oracle databases (article in swedish) because of expensive licence costs. In this article, I would like to offer a simple and cheap option to Oracle virtualization.

Organizations want to virtualize their Oracle databases for many reasons, one being to reduce license costs. Other reasons include reducing hardware costs and making it easy to add new databases.

Simply put, hardware virtualization is basically about exchanging many physical servers for a single big server. 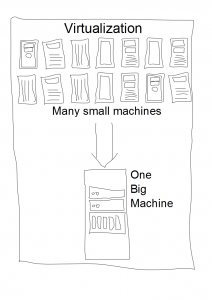 You may prefer the wikipedia definition of virtualization, but mine is short, sweet and simple.

Instead of doing Oracle virtualization using VMWare or Oracle VM, you can install several Oracle instances in a single Oracle installation, in a single machine. This is not what people usually mean when they say virtualization, but you get many of the benefits this way, and it will reduce your Oracle license costs!

I have seen this work very well, especially for testing and development installations. Virtualization of databases in a production environment may not be as common, but there’s no reason it shouldn’t work there aswell.